The future of work from a Dutch perspective: a call for action

We live in turbulent times, marked by great changes. Several crises and problems are piling up. Governments have to enforce inclusive and sustainable solutions for climate change, digitalisation and social or economic downfall. Yet, complex and old bureaucratic systems stand in our way. Policy implementation lacks behind. In the meantime we will be confronted with more transitions as on biodiversity and water. Global markets do not automatically enforce ‘just transition’. Businesses have to become more sustainable, but also struggle to survive due to the covid and the energy crises. Low and middle income households, especially the practically schooled, also struggle, often due to temporary and insecure jobs. And civil society faces the daily rush and high expectations of individuals having to be successful in all aspects of life. Youngsters face severe psychological and social pressures. On the average the Dutch still have a high quality of life and a low unemployment rate. But polarisation grows and the fear of falling has become reality for many.

The Dutch historically sought cooperation and compromising between government, market and civil society to tackle big societal and economic challenges. Can this Dutch polder model of consultation between employers, employees and government still withstand the rapid changes and crises we are experiencing? Of course consultation takes time and mutual respect. Can this Dutch way of deliberation and muddling through be the `Dutch miracle’ as it has proven before?

The proof of the pudding is whether todays’ bus driver will still have work in the future; how healthcare professionals will connect to robots; whether AI will take over jobs in services like law and accountancy. This touches our social contract, the written and unwritten expectations citizens and businesses have from their governments and the other way around, on the basis of rules, rights, duties and tradition. It is about mutual dependencies between employers, labour unions and government in creating and sharing prosperity fairly by income policies, quality of work, access to pensions, healthcare and social security. It is also about fair chances for sustainable entrepreneurship. Our current social contract no longer provides enough future perspective for too many professions and businesses.

We have to adapt quicker to the future of work. Together with you, I want to search for appropriate answers.

The future of work: an urgent social and economic issue

The major transitions mentioned are causing, or have the potential to cause, disruptions with far-reaching consequences for the importance and place of work in our society and economy; they are resulting in major shifts in employment between sectors, and in the quality and organisation of work. Increased flexibilization, platform economy and intensification illustrate major changes in the speed and nature of work.

What we do know based on research is that those transitions already increase social divisions. Polarisation between those who see and get opportunities on the one hand - mostly academically educated - and those - mostly professionally trained and less educated - who fear the future, have less access to re-training and face twice as often job insecurity, or fear that the next generation will be worse off. Joblessness is low in the Netherlands, but the amount of flexible and insecure jobs is high. Also more than half of the 2.5 million physically or mentally limited people lack jobs. For people with migrant background job security is almost three times less. Women still get less chances and income compared to men in several sectors. Discrimination and stereotyping hinder inclusion.

This social inequality adds to existing societal discontent, especially among groups with job insecurity. It stresses that our social contract gets stuck without appropriate action focused on the future of work, in the private as well as the public sectors. Next to good intentions and current government policy to tackle these issues a certain sluggishness, inertia even, is seen in implementing reforms; a certain impotence and reticence to act. We need to work more urgently to resolve these problems.

Let me explore wat this means for the future of work.

We need a realistic picture of what is important to people – employer or employee - across all aspects of their daily lives, of what kind of meaningful, developing and connecting role work can play in this regard, keeping in mind that working, learning, caring, living and recreation are interlinked in people's daily lives, especially due to new technological innovations.

This asks for rethinking societal challenges and approach them in an integrated way, based on the concept of broad prosperity, across the boundaries of different policy areas, sectors and ministerial domains. Working also is about learning and caring. Housing also is about work, like energy policies.

This touches the roles and responsibilities within our polder model. A balance is needed between the self-organising capacity of individuals, self-regulation of parties (for example through collective bargaining agreements between employers and employees) and mandatory laws and regulations. But next to employees and employers other partners like environmental NGO’s and the young generation also have to be represented in an inclusive strategy towards sustainable growth and future work. My predecessor at the SER – Mariette Hamer – has already included those groups successfully. But more will be needed.

To what informed choices for the future of work and for our labour system does this analysis lead?

First. Permanent concern is needed for appealing, meaningful work that offers people prospects and enables them to fulfil their roles within society in a balanced way. As formulated by our Scientific Council for Government Policy, good work is defined by three conditions: control over money (financial security), control over work (autonomy, development, interaction, utilisation of abilities) and control over life (being able to combine work with other tasks). All of this also raises the question of what kind of economy we want to live in, with what kind of work, as the Netherlands Institute for Social Research (SCP) stresses continuously.

Second. Connecting and intertwining work and learning (as well as caring), during the different stages of life is needed. More focus on peoples’ skills and valuing craftmanship. Lifelong development is essential to acquiring and maintaining the ability to adapt to transitions and major, sometimes abrupt, changes, as well as to remaining sustainably employable. A "good" social safety net and an appropriate set of supportive and proactive services, helps people to change jobs with confidence and can help entrepreneurs start new businesses.

Third. Achieving a better equilibrium regarding the number of Dutch people on permanent contracts and those on flexible contracts is needed. Job insecurity causes less social security, limited access to life long learning and affordable houses. We must seek a future-proof balance between protection, social security and job security on the one hand and promoting entrepreneurship, growth in earning capacity and internal flexibility on the other.

Fourth. There are too many people struggling to make ends meet due to limited access to the labour market and even while in work (the working poor but also small businesses). Work as well as entrepreneurship should be valued properly in payments, as well as peoples’ skills in job vacancies.

I realise that these issues – how sad! – are not new or have been dragging on for a long time. Yet, the SER’s medium-term recommendation on labour market reform addresses these issues and became the basis of our governments labour market policy, that’s great, but future work moves much faster than politics!

Can we see and use game changers to accelerate change?

We should think about real game changers. Think and act the impossible! Like during the COVID crisis boosting the transition towards hybrid working. Working flexibly, in terms of time and location, has become increasingly commonplace.

Existing and upcoming shortages in the labour market also force us to rethink the organisation of work, how we deploy people, how we make choices. This is about a comprehensive and accessible system of child care; another attitude towards part-time work and working more hours (and getting paid accordingly); permitting the entry of migrant workers; enforcing substantial and quicker progress towards diversity and inclusion. Statutory targets for more cultural diversity, as well as quota on gender, can be game changers in fighting unequal opportunities.

The current energy crisis and need to tackle climate change also force us to think urgently about other forms of economic activity, about the pressing need to step up recruitment in the technology sector and about the energy transition. This will also provide opportunities for new work, such as green jobs. Here I would like mention another predecessor as SER-president, Wiebe Draijer, who helped to bring about the 2014 Agreement on Energy.

There should be no taboo. Such as perhaps a new tax system with a new balance in taxing labour and capital, simpler for entrepreneurs and companies, and a basic income for all; real investments in prevention of labour related and other diseases; and – why not – activate the military duty for 18 year old men and women, broadening it up to social duty. Stimulating the working force, stimulating entrepreneurship, stimulating citizenship and good work as real game changers. Not only in fighting wealth inequalities, but also enforcing productivity.

A real game changer would be committed political cooperation for long term policies. Fragmented and polarised politics combined with a lack of effective policy implementation hinder adaptation to future needs. But in helping government also sociologists, ecologists, creative thinkers and economists have to cooperate in order to really go beyond GDP. And we need more representation of less heard groups as well, such as the younger generation. Their insights are not nice to know, but needed. Nationally, but also on EU and global level, we need committed politics and new governance systems.

Conclusion: work is key to our future social contract

History shows that big societal and economic transitions, such as from the farmers’ society to the industrial revolution, force us to create new perspectives on good work, entrepreneurship, social security and education in order to fight societal polarisation and enforce prosperity for all. This is that moment in our information society, requiring new citizenship, new entrepreneurship and new government.

A new social contract has future work as key element and requires ‘out of the box’ thinking. Our challenge is ensuring that no one is left behind. That people who were - or already are - at a disadvantage can be “pulled back in”. It asks courage to prioritise groups. What kind of solidarity, connected to future work, care and lifelong learning, is required? At what price for whom?

Just transition can only be based in sustainable and inclusive entrepreneurship and a trustworthy government guiding us with a long term vision on the economy and society we want to be. We need to do this together. Yes, the bus drivers’ job and healthcare services will change, but shouldn’t we still value human contact? If so, this has a price and it should influence political, entrepreneurial and daily life choices about good work today.

The Dutch polder model seeks for support for difficult choices concerning our future work by consultation and cooperation, instead of fighting each other’s interests. For me the work of the SER is a matter of civilized coexistence, with respect for democratic political processes and decision-making. In view of the speed of changes I feel the urgency to find game changers for good work. Like UN SG Guterres asked us to do on climate change. Today I hope we not only share this feeling, but really act on it now. 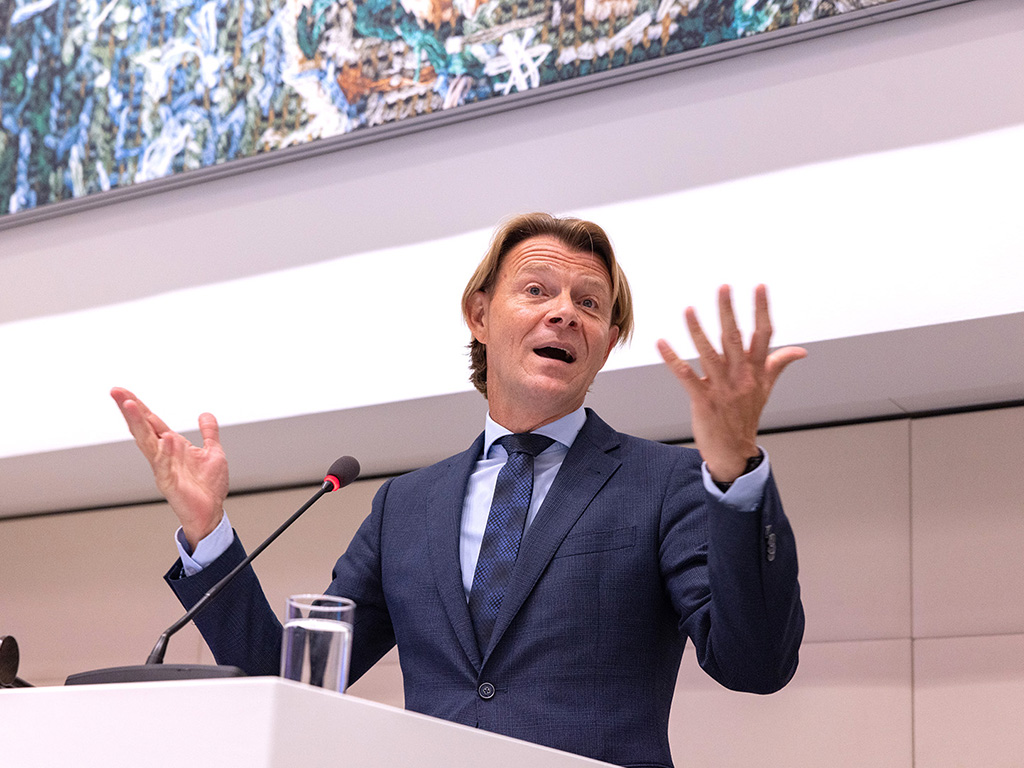